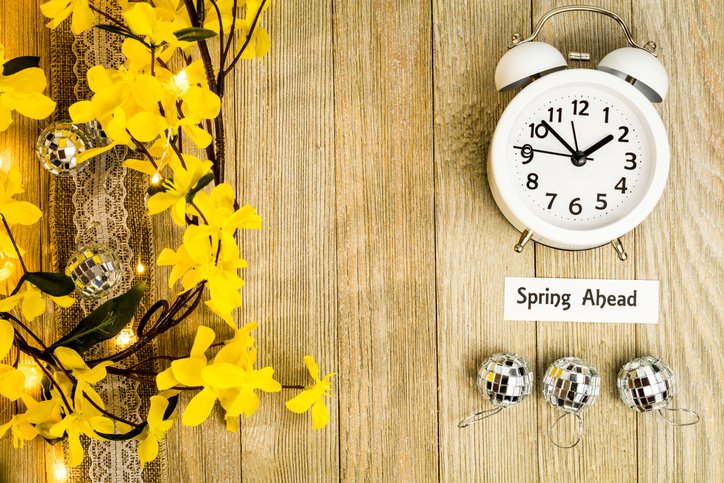 It may not feel like it here in Upstate New York, but we are a mere few weeks away from the March Equinox on March 20th, at 5:58 pm EDT. This weekend we get one step closer to what seems like an elusive spring. We turn the clocks ahead an hour.

The Uniform Time Act of 1966 created the system of Daylight Saving Time throughout the US. According to timeanddate.com,

“Records show that the phrase “spring forward, fall back” has been in use at least as far back as the early 20th century. For example, the Heppner Gazette-Times on October 28, 1928 printed a notice stating “Daylight Saving Time ends this Sunday, October 31. Remember to set your clocks back one hour, ‘Spring Forward – Fall Back!’.””

Another fun fact from www.timeanddate.com :

“With the exception of the Navajo Nation, Arizona does not set the clocks forward 1 hour in spring for DST with the rest of the United States.

Arizona is exempt from DST according to the US Energy Policy Act of 2005. The Act gives every state or territory the right to decide if it wants to use DST. If DST is observed, the state has to schedule DST in sync with the rest of the US: From the second Sunday in March until the first Sunday in November.

Because of Arizona’s hot climate, DST is largely considered unnecessary. The argument against extending the daylight hours into the evening is that people prefer to do their activities in the cooler evening temperatures.”

So, this Saturday night, if you have a clock on the wall or any ‘old fashioned time piece,’ manually set the clocks ahead before you go to bed or wake up when the time is about 2:00 am and turn the clocks forward 1 hour.

Yes, you lose an hour of sleep. But yes, there will be more sunlight Monday night on your way home from work.

Soon the sun will be warmer and the breezes that blow will be refreshing. An evening under the stars will not include four layers of clothes and a roaring fire.